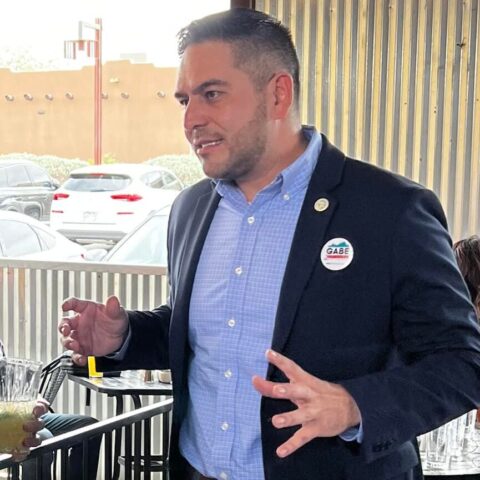 Yvette Herrell is fighting for New Mexico and delivering results. All New Mexicans can count on Yvette to fight for oil and gas jobs, lower the cost of living, secure our border, and to help make our communities safe.

Swing and Hispanic voters are seeing in the mailboxes that Yvette Herrell is fighting for New Mexico and delivering results. All New Mexicans can count on Yvette to fight for oil and gas jobs, lower the cost of living, secure our border, and to help make our communities safe.

Hispanic voters need to see on Spanish TV, Spanish radio, Spanish Cable, and Spanish digital that Gabe Vasquez is an extremist who not only supports defunding the police but also believes the US needs to “deconstruct law enforcement.” Gabe Vasquez is too dangerous for New Mexico.

Vasquez is the founder of an organization that wants to defund the police, and says the United States needs to “deconstruct” law enforcement, one of the country’s “systems of oppression.”

Vasquez supports an indefinite pause to oil and gas leasing on federal pubic lands, and was the deputy state director of a group that wants to permanently end oil and gas production from public lands.

Gabe Vasquez supports tearing down the “racist” border wall, abolishing the office of immigration and customs enforcement, ICE, and shutting down their “racist” facilities.

Vasquez believes the U.S. needs to “deconstruct” law enforcement, calling it a system of oppression, and he has called for a “fundamental power shift” to topple white people who preside over “racism, killing & injustice.”

Gabe Vasquez supports a public healthcare option that could cost one point five trillion dollars, raise taxes on the middle class, increase the deficit, and threaten access to care.

NEW (10.5.2022) ARTICLE: Democratic candidate running in toss-up race called to end oil and gas ‘immediately,’ said ‘shut it all down’

NEW (10.5.22) Anti-Energy Comments:  Gabe Vasquez hosted NM State Rep. Angelica Rubio on his podcast and he divulged some of his anti-energy stances. The full segment is available here.

Born and raised in New Mexico, Yvette Herrell started her path towards the American Dream like many of us – hard work, determination, and grit. As a proven job creator and entrepreneur, Yvette has started several small businesses throughout New Mexico.

With this business experience and her love of New Mexico, she ran for the State House of Representatives, representing Alamogordo. In her time serving the 51st District in Santa Fe, Yvette led the fight for less government overreach for small businesses, responsible spending, and protecting private property rights. It is here she found her passion for serving the state she loves and learned what it takes to deliver real results for her constituents.

In 2020, Yvette was elected to the U.S. House of Representatives for New Mexico’s Second Congressional District. Continuing her work as a champion for hardworking New Mexicans, protecting our freedoms, and always putting New Mexico first.

NEW (10.5.2022) ARTICLE: Democratic candidate running in toss-up race called to end oil and gas ‘immediately,’ said ‘shut it all down’

“Reilly White, associate professor of finance at the University of New Mexico, said inflation has grown 9.1% over the past year – a steep increase that hasn’t been seen in decades.”

“How did we get here? Many economists blame out-of-control government spending along the way.” (1:00-1:07)

CNBC: Inflation rose 9.1% in June, even more than expected, as consumer pressures intensify

“This latest revenue surge could prompt a feeding frenzy in a state with high Medicaid enrollment levels, roads and bridges in need of repair, and a public school system that for years has been among the worst-ranked in the nation.”

MSNBC: Everything is going up.

“It’s not just gas. Housing is up, the price of clothing is up, gasoline of course. But all of these things are creating a terrifying trifecta of inflation that’s hitting everybody. (0:29-0:41)

ABC’s Jonathan Karl: Gas prices were on the rise before the Russia invaded Ukraine

“Biden has called it a Putin price hike, but most Americans aren’t buying it and the fact is prices were on the rise before Russia invaded Ukraine.” (0:01-0:10)